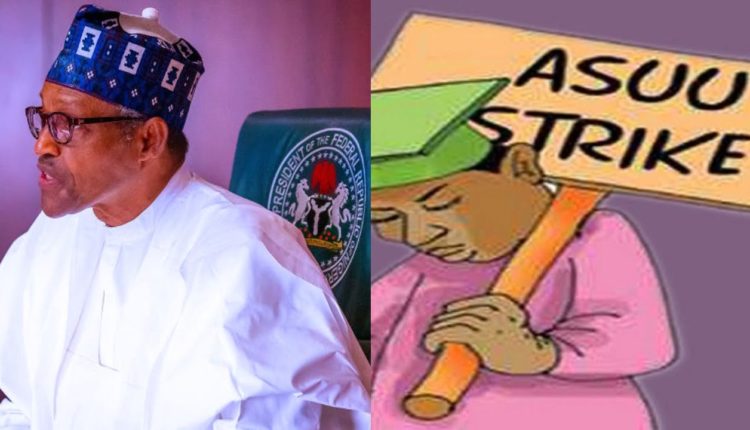 President Muhammadu Buhari has appealed to the striking members of the Academic Staff Union of Universities (ASUU) and other related uni0n s to call off their strike to allow students go back to classrooms.

President Muhammadu Buhari who was represented by his Chief of Staff, Prof. Ibrahim Gambari made the appeal on Friday while speaking at a Special Convocation ceremony organised to confer Honorary Doctorate Degree on a business mogul, Alhaji Muhammadu Indimi by the University of Mauduguri.

“I want to use this opportunity to appeal to the ASUU to reconsider its stance to call off their 7 months old strike, as students and their parents are desirous to see that schools are reopened.

The nation cannot afford long interruption of higher education of the youths and wouldn’t undermine the development of the nation’s human capital in a strictly competitive world,” the President stressed.

He further pointed out that the appeal was made in view of students desire to return to the classrooms with their parents seeking for reopening of the shut down Universities.

President Buhari added that despite the security challenges, his administration has made tremendous achievements in the area of security, as evidenced by the occasion holding in Maiduguri, stressing that since the inception of democracy in 1999, many administrations have been talking about diversification of economy, but only the present administration implemented it.

Dr. (Alhaji) Muhammadu Indimi, the Chairman of Oriental Energy Resources Limited, committed his resources and built the International Learning Centre, a befitting structure with state-of-the-art facilities and a Conference Centre for the University of Maiduguri, hence the reason for conferment of the honorary degree.

“This is an exemplary, and worthy of emulation by all people of means and goodwill. I wish to personally extend my appreciation to Dr.Alhaji) Muhammadu Indimi for this gesture and belief in the University of Maiduguri.

I pray to Allah (SWA) to continue to bless him, replenish his resources and continue to make more contributions for the benefit of humanity. Please Sir, accept my congratulations”. Manu added.

In his welcome address, the Vice Chancellor of the University of Maiduguri, Prof Aliyu Shugaba also appealed to the striking ASUU and other uni0n s to call off the strike .

“I am using this opportunity to appeal to the striking ASUU and other Unions within the university system to call off the strike. I also want to call on well meaning Nigerians to intervene to enable students go back to school “, the VC appealed.

In his remarks, Alhaji Muhammadu Indimi thanked the University for the honour, stressing that the Honorary degree will spur him to do more.. #BBNaija: 7 Remarkable Highlights From ‘Level Up’ Season
5 days ago

Music: Black Sherif – Oil In My Head
4 hours ago

Ethiopia ‘Bans’ Visa On Arrival For Nigerians
2 days ago